Travelling from Nairobi to Garissa and Wajir by Bus -Experience 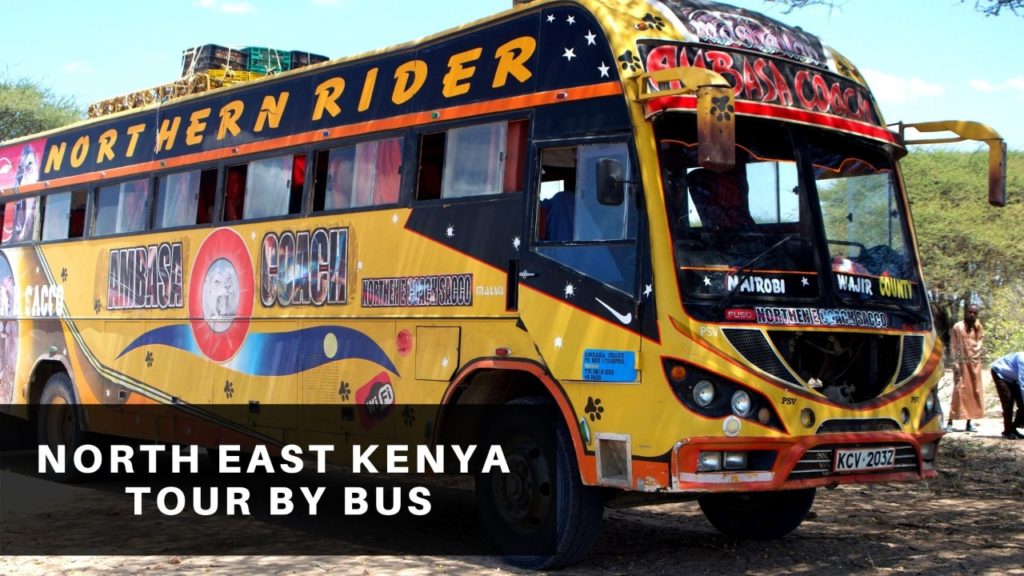 (This is a transcript from the video linked below)

Take a minute and google Garissa, Wajir and Mandera and you will find several negative stories about the area from terrorist attacks to road accidents. But this is not that type of video. Being like most Nairobians, I didnt know anything good about the areas and so I decided to travel there and this is my experience through the journey.

The journey began by waking up 6am, which is extremely unusual for me. I had to get a cab which took me to Eastleigh and I booked a Rayan coach bus which goes to Garissa. I have used this bus before to go to Mwingi and always wanted to reach Garissa for the first time. The bus cost 1500 shillings.

The bus was comfortable and even had working usb sockets. The seats could reline and they were comfortable. Due to the current global pandemic, seating was spaced out well with everyone having an empty seat next to them.

Exactly 8.30am we were off in what started as a smooth ride but turned to a nervous ride as the bus was literally flying and by around 1.45pm, we had arrived in Garissa.
The road to garissa is well tarmaced and can be accessed with any sized car and can make for a simple road trip.

The terrain is mostly flat and because Eastern Kenya is mostly an arid and semi arid area with large flat lands covered with shrubs, there is nothing much to look at beyond kms of dry land.

On reaching Garissa town, I walked around for a while just trying to familiarise myself with the area and later on booked a hotel. It is unfortunate that despite there being many hotels, they are not online in the popular apps like Airbnb, booking.com or even jumia travel. I chose the most popular hotel called Nomad hotel and I chose it over others because it was just a walking distance to the town center. I booked the hotel, which cost 2500 shillings per night.

After resting for a while, I was out again trying to figure out some activities I might be able to do. First thing I wanted to see was the Tana River which passes close to the town. I took a bodaboda that took me there but ended up being disappoineted with the location since there wasnt a lot to look at or do.

I wished there was some kind of structures that people would seat and soak in the views or even boat rides whenever its known that the river is calm unfortunately there wasnt much to see and I had to leave. I went back to the main town and walked around even more just going round and round the small town.

I ocassionally asked bodaboda people if there is anywhere i could go but never got any recommendation. The national parks that people can visit are atleast 50kms away and you need a car to access them.
One thing I was told though was that Garissa has a very vibrant night life. There was no way to explore that because of the global pandemic and nightime curfew in place.
The most convenient mode of transport in Garissa is Bodabodas or Tuktuks which are in the hundreds. Garissa is full of shops and small markets as it is with towns with people of the Somali origin who are very enterprising.
I ended my day with spending an hour watching a football game in a field just next to the town. I dont know the teams or which team won but it was interesting passing time there.

Evening come and I retired to my hotel room ready for the next day.

Waking up early again for the 2nd day wasnt that hard. I quickly took breakfast and rushed to the bus stage ready to travel to Mandera if possible. The bus companies in the area told me there is no bus going to Mandera since the governemnt had withdrawn all security escorts. If I wanted to reach Mandera, I would have to take the bus to Wajir, and from there board a pickup or hitch hike a lorry which would take me to mandera.
Mandera is a whole 345 kms away from Wajir. TO put that to perspective, its as a far as from Nairobi to Kisumu, or Nairobi to Kisii, nairobi to eldoret or Nairobi to Meru and back to Embu. A journey that takes roughly 6hrs in other parts of Kenya but in north eastern kenya, with the untarmarked, dusty roads and literally driving on desert sand, it can take upto 10 hours if the weather is fine. On reaching Wajir, I was advised to get a car heading for mandera, which would then stop in some town along the way when 9pm reaches for people to sleep and the journey will resume 4am after the curfew ends. The alternative was to wait an extra day in Wajir and travel to mandera the next day early morning.

At that point, I wasnt really sure on what to do next and decided to go to Wajir first, and if it still early, proceed to mandera.

I arrived at the bus terminus 8am but had to wait till 10am for the first bus to arrive.
The bus looked beat up despite having a newer number plate. It didnt have a front grill and I just crossed my fingers that the road was good. It wasnt.

The seats in the bus looked new and okay. I paid kshs 1500 fare to Wajir and exactly 11am we were off.

Unlike the trip from Garissa to Wajir which started slow and gained paced, this time round its like we started driving at 140kmphr. I put on my seat belt and just hoped that is not my day of dying because we were flying.
The road was very good, newly tarmarced road for about 50kms and then we turned to one of the roughest and dustiest roads I have ever been to in recent times. It only reminded me of how bad the roads were in my highschool years with the Akamba buses trouting through the forests of Naivasha and hills past Nakuru.

The road was extremely terrible. It all made sense why the bus was overspeeding on the tarmac. it was all to make up time for the slow-ish speeds we were to face ahead. It also made sense why there are so many road accidents along the garissa and mandera route. The poor infrastracture gives the drivers no alternatives other than to risk lives because being stuck in the middle of nowhere is eqaully dangerous. We passed through semi arid and arid areas. The bus was skeeding in several occasions and I kept thinking how there is a higher chance of dying from a bus crush than a terrorist attack in that route.

There wasnt much to see outside apart from empty vast lands full of shrubs. The scoching heat would make you want to open the windows but the rising dust from the bus moving wouldnt give you that option.
Along the way I saw 3 giraffes with one being next to the road the driver had to hoot for it to move. There were several antelopes along the way and so many camels.

After several kms, we stopped just a few minutes past 1pm for the Muslims brothers and sisters to pray as is part of their religious practice. For us non muslims, We alighted from the bus to stretch our legs for a few minutes and within 15minutes, we were off again. The journey went on for what can be described as a lifetime but finally we reached Wajir town close to 5pm.

At that time, I wasnt going to travel to Mandera. I talked with more people about the journey to Mandera and I didnt get any good news other than people telling me to avoid the journey for a few days as they wait for the government to restore security. I cancelled the idea of going to mandera.

One thing I realised about Garisas and Wajir town is that they have a plastic pollution problem. This might be contributed with the heat and scarcity of water making people use more plastic bottles to carry water but with poor disposal, the towns have been littred with a lot of plastic

As is my tradition, I started with aimlessly walking in the town just to familiarise myself with the place before booking a hotel room.

I booked the Hilton Hotel which was just close to the Wajir Airport.

After resting for a few minutes, I went back to wajir town to walk more and have supper before going back to the hotel and ending my day.

On this day, I had already decided I wont go to Mandera and went to Wajir airport to catch a flight back to nairobi. I saw news posted on twitter about Lamu bus drivers complaining their bus security was withdrawn too and that only assured my cancellation of traveling to Mandera.

I managed to book a last minute flight with jetways and the plane left Wajir 9.am for a 1hr 20minutes flight and we reached nairobi exactly 10.20am. That was the end of my North eastern adventure but only for the time. Until next time when security has been reinstated, I will finish what I had started and reach Mandera.

My final opinion would be there is no much difference between Wajir and any other Kenyan town. I wish the county governemnts of the areas would create or give people the chance to create fun activities that can be done in the areas and capitalize on hitch hickers and other kinds of tourists. After all, Dubai is a desert, so it can be done.

If you have listened this far, thank you for your time and dont be afraid to travel. Get a bus to any location you think of and travel there. Time is all we have and travel more.

have a good day and see you on the next adventure.