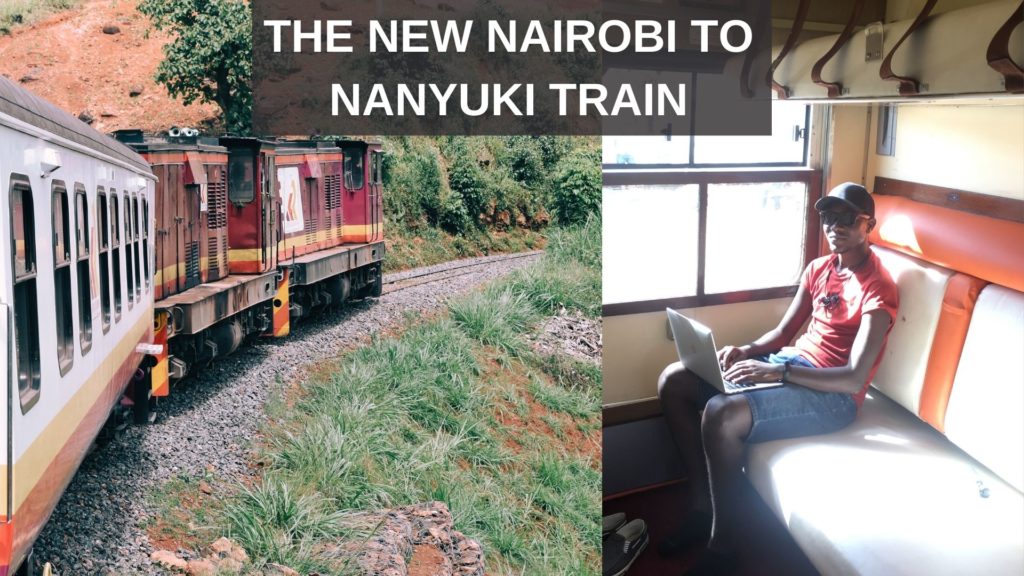 After more than 20 years of not being operational, the train from Nairobi to Nanyuki was revived and launched on December 11th with its first public users making the trip on Friday 18th. The train line , commonly known as Mwisho wa reli because it terminates at the end of the Eastern side line, was a welcome move to many residents and will definitely usher in new markets for central kenya and eastern region. As the train snaked through the regions, you could see people taking pictures and happily waving and kids would run chanting gari ya moshi.

The train ride cost kshs 200 from Nairobi to Nanyuki in the 3rd class and kshs 1000 in the first class. In between different stations, the cost from one town to another did go to as low as 30 shillings.

While traveling to Nanyuki, I used the 3rd class and it was not a very comfortable ride. The seating arrangement is similar to the normal commuter trains. This made the ride very uncomfortable after a few hours and there were several people who were standing through the journey as we picked up more passengers. Being an inaugural run, I believe Kenya railways didn’t anticipate a lot of people to travel and put few coaches.  only 4 for the 3rd class and 1 for the first class.

The seating in first class though is a very sharp contrast from the 3rd class. I used the first class on the ride back from Nanyuki and it was a very comfortable ride which made me appreciate the ride more.

From Nairobi to Nanyuki, the train took 9hours which Honesty is a very very long time compared to using a matatu which take 3hrs to 4hrs. We left Nairobi exactly 9.30 am and arrived in Nanyuki 5.50pm.

If you are in the 3rd class like I was for the 9 hours, the journey might not be as pleasing since the train was full.

the train made several stops some being as long as 20minutes which I believe resulted to the longer time of the journey. When coming back to Nairobi, the stopping time was reduced to as low as 4mins and that also contributed to the shorter time.

The journey back from Nanyuki to Nairobi was a bit shorter and we took roughly 7hrs. We left at 10.30am and arrived in the Nairobi station 6.05 pm for a total of 7hrs 35mins. I was in the 1st class on our way back and this time round I didn’t complain about the time or speed because of how comfortable it was.

In the 3rd class there being alot of people, it made it hard to do good site seeing because you would be blocked by other people and there was restricted movement. Once in a while you would catch a glimpse of the awesome terrains of central kenya while the train meandered through the hills of Sagana all the way to Karatina.

The journey to Nanyuki involves climbing several hills which also made the journey slower compared to the journey back where you will be doing more descending.

The first class is the best way to travel the train for site seeing and  just appreciating the journey in general. You will have all the room and space to move around and soak in the views from both sides of the train.

After the first train ride, my suggestions would be that more carriages need to be added to accommodate more people in the train both 3rd class and first class. Another suggestion would be to increase the number of trains from 1 to maybe 2. Like the sgr, it would be a welcome move if we also had an express train that didn’t stop. And for the one that stops, the stoppage time reduced to as low as 3minutes in every stop.

Another suggestion would be the introduction of a an online booking system. While in Nanyuki, several people were left behind because they arrived a bit late and the train was full.

The train also operates only on Friday to Nanyuki and Sunday back to Nairobi and it would be better if there were several more trips especially during this festive and holiday season.

In conclusion. The train ride is not for people who are in a rush because of how long it takes but if you are maybe just going for site seeing and a vacation in Nanyuki, the train is perfect but again only using the first class unless the seating arrangement of the 3rd class is changed to match the economy class of the sgr.

Lastly, carry a lot of food and water because there might not be people selling items in the train. During the stops, there are no shops or street vendors. Hopefully this will change in due time.