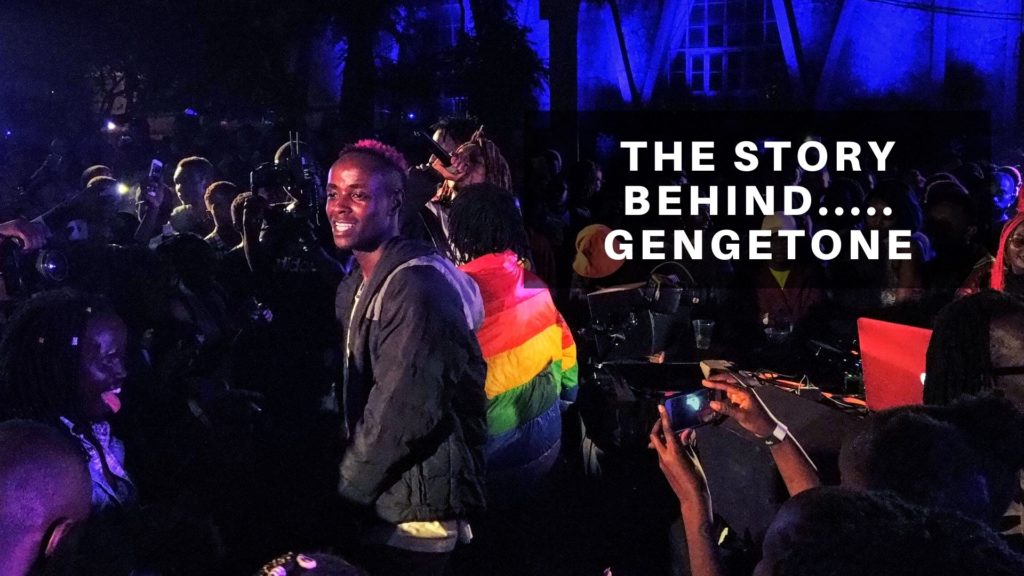 Africa has had a silent rise in music over the past few years and the younger generations are forging new sounds. South Africa had Nqom and now it has Amapiano. Nigeria has a new sound called Alté which is short form of Alternative. Central Africa countries have what they call Afro Congo which is the same old Lingala but with fusions of sounds from other African nations and here in Kenya we have Gengetone. While other countries have sustained sounds over years e.g tanzania with Bongo, in Kenya, it is complicated.

But lets start with asking. What is Gengetone

Gengetone come to fame purely by chance. The popular rapper Khaligraph jones had started a popular hashtag dabbed PlayKenyanMusic. This was as a reaction of how a lot of music plaid in radio and tv stations was foreign. The same was seen in the night club scene and also the artists invited to perform in Kenya. Foreign artists have always been paid a lot more for performances in kenya while very few kenyan artists have managed to pull huge crowds beyond our borders.

In the middle of that hype, a group called Ethiks had released a song called lamba lolo and it instantly become a hit. It was a simple video probably recorded only using a smartphone. Its popularity led to a lot more young artists creating such kind of music. They had simple funny lyrics with deep sheng, simple videos shot on smartphones that are not advanced and the songs also capilatized on emerging trends from politics to just random memes that popped up around. Ochungulo family are well known for capitalizing on trends and groups like Boondoks Gang also emerged among some other solo artists like One delo, Chris kaiga among others. The sound had been born and it had backing from all kenyans.

Genge tone is a more upbeat Genge. The beats are a bit faster and even the delivery is quick almost likened to raping and in fact I think most gengetone artists can also do hip hop with ease.

Genge has always been in kenya for a while. It was popularised with the OGs like Nonini, Juakali and Mejja who come from Clemos Calif Records. But Genge was not a lone. kenya also had a different sound then that could be said was more popular called Kapuka, On this front, there was Nameless, The Late E-sir, the late K-rupt, Kleptomaniacs, The Longombas, Amani, etc. And the music was promoted through Ogopa Deejays. The popularity of this two sounds was in fact a beef between the urban and hype uptown guys with Kapuka vs the Ghetto raunchy Eastland guys with Genge. At the end, their popularity attracted huge following. But then they just died down. Its like overnight, everybody was listening to Bongo Music. All airwaves were playing songs by matonya, TID, Z-Anto, Mr Nice and a whole lot of Tanzanian artists. They had just introduced Bongo music and it hit us without knowing it.

Kapuka and Genge and even now gengetone for what it is had deep jamaican dancehall influence and this brought all the ratchetness with it. The bongo songs were melodic & calm with storylines and lyrics you could sing a long to when seated next to your mum unlike songs like manayke all sizes which you could feel the stern look from your mum across the other room.

But even if we move further back to the 90s, we can see that Lingala music dominated our airwaves. And in the 80s it was reggae and country music. In the mid 2000s, nigerian music with artists like P-Square took over and for a brief moment kwaito from south Africa was popular. Anyone remember that time we all danced to Windek by cabo Snoop. In short, through time, a foreign music genre always dominated our Kenyan airwaves.

On the other end of Kenyan music is the vernacular music and this seem to have a huge but limited following since they are restricted to tribes. Once in a while a song will be able to crossover and become popular and played everywhere but this doesn’t happen so often.

So what is the future of gengetone and will it last?

This is hard to say because unlike the time bongo and Nigerian music took over our airwaves, we didn’t have regulations like media stations should play at least 60% Kenyan content. This regulations and the drive of people wanting to connect with local content is what might just give gengetone a lifeline and hopefully even if it dies out as it will, eventually, we can hope that whatever new sound that will come out of the Kenyan youths of that time will be adopted and promoted more and hopefully we can finally get our music in the international scene because this only happens when the locals adopt it, create dances and other fun things around it, then push it out to the international scene. With youtube and streaming services, we are just moments away from having viral videos coming out of Kenya. The only viral music video that I can think of that has come out of kenya is Makmende by Just a Band and that was like 9years ago. So lets continue supporting the Kenyan music scene. And doing this is simply giving them the views on youtube. streaming their songs and attending shows because when they get paid, then they are also motivated to create more.
In the description below I have linked a playlist with over 100 gengetone songs which you can follow as I update it at least once every week.