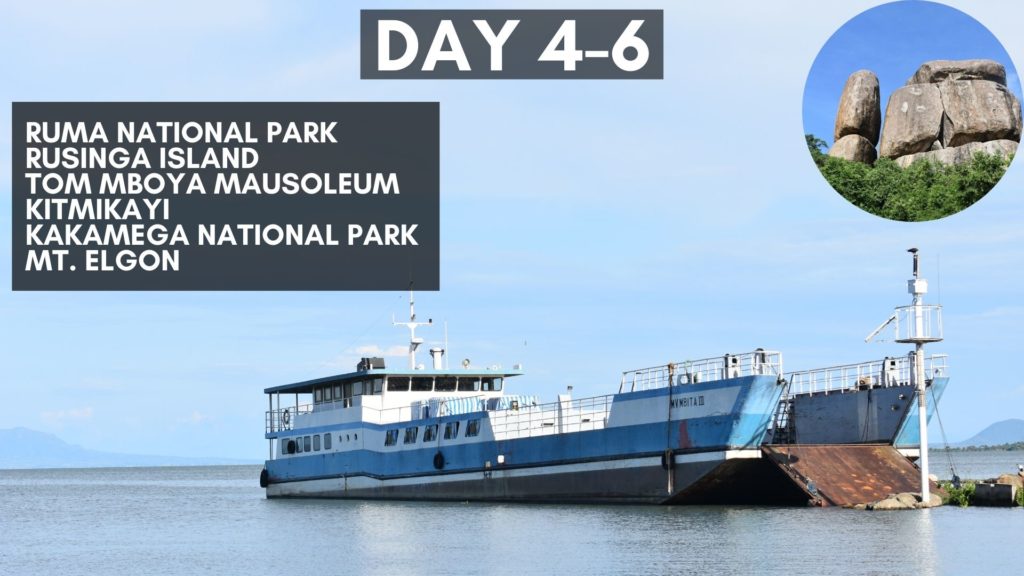 In the morning, still in Homabay town,  a mosque decided to be the alarm. Coming to think of it, I had the worst sleep in homabay. Maybe after a few days staying there I would have become numb to the noise but luckily morning came and we were off to the next destination.

We drove some 30kms to Ruma national park. The park is also the only place in Kenya where you can spot the roan antelopes. The park had dense shrubs making spotting animals a bit hard. We drove for about 2 hours and we didn’t see any roan antelope. In plenty were the rothschild giraffes. If we gave it more time maybe we would have been lucky to spot one but then we exited the park and drove to Rusinga Island.

First attraction was the Rusinga bridge which according to the locals, was a construction that was long overdue. The bridge connected the main land to the island making it easily accessible unlike previous times when you had to use a boat to the island.  Driving around Rusinga Island was amazing. The entire island was bigger than I had imagined before with the length being 16kms from end to end. Another attraction in Rusinga Island was the Tom Mboya mausoleum. Tom Mboya is one of the founding fathers of Kenya and helped shape politics in Kenya after gaining independence in 1963. Unfortunately he met his untimely death in what is a mystery that is being discussed today. The mausoleum is shaped like a bullet which is how he died. We paid our respects and drove out of Rusinga island back to the mainland ready to visit another island.

We took a boat for an estimated 40minutes drive to Mfangano island. The boat ride was very fun and at that point was the longest boat ride I had ever done. Made a quick stop at the Abasuba peace community museum which unfortunately didn’t have much to see and the place looked abandoned. We got on the boat again and went to the other side of the island to visit the Mawanga rock site. This was  a quick stopover looking at the rock arts that date 4000 years old.

We took the boat ride back to Mbita and quickly proceeded to the ferry which connects Mbita to Lwanda Kotieno or loosely,  southern Nyanza with Northern Nyanza. The sunset from the ferry was beautiful and the ride very smooth. You are allowed to leave the car and just walk around. Lake Victoria has always been my favourite water body in Kenya but this spot was stolen by another lake.

We drove all the way to a small town called Kitmikayi. Here we slept in a hotel that didn’t give us a very good experience by trying to change the price in the morning claiming they had given Jane and Albert a bigger room. A quick tip, always confirm the price when being shown a room to avoid any misunderstandings in the morning.

That aside, in the morning we visited the Kitmikayi rocks for a quick visit. This is one of my favourite spots in Nyanza region although the stories usually sound made up but I guess that’s what happens when stories are passed down for generations. The rock formation is impressive and if you go in the evening, you get to catch a good sunset.

We drove to Kisumu and drove around the streets of Kisumu before proceeding to the Kisumu museum. Right after we got into the museum, we got a puncture at the parking lot. That was the 2nd puncture of the trip. At this point we could become safari rally mechanics with the amount of tire changes done and the lack of tools for lowering the tire made the whole situation worse every time. Kisumu museum was interesting to see. You get to learn about the culture of mostly the luo people and other communities from western kenya and learn of their fishing lifestyle. There is also an aquarium which has different types of fishes that are found in Lake Victoria.

We headed north and the next stop was at a popular tourist destination in western Kenya called The crying stone. The irony is that the stone stopped crying & it only does during the rainy season. Legend has it that the Gods were angry so it stopped crying and it signified long draught. The place looked not very well maintained though but it was a worthy visit.

The final destination of the day was the Kakamega forest. I visit Karura forest quite often but if Kakamega forest was in Nairobi, that would be my new favorite place for walking or cycling. The dense forest of kakamega was beyond surreal. You could feel like you were breathing pure air and the sounds of birds singing just gave it a completely different mood from all the parks we had visited so far. Kakamega forest is the only remaining true tropical forest in Kenya and its vegetation can only be compared to the forests in Congo. We walked for a while and went up a hill to a view point and you could see how thick the forest is. Again for me, this was the highlight of the day. Oh, and we had the 3rd puncture in Kakamega forest just when we go in. Our day ended in an airbnb in kakamega town.

A very early morning drive led us to Kakapel National monument. This place has some rock ars which also date about 5000 years old from the neolithic times. There is a hiking trail that you can do but our focus was to hike our next destination.

Next stop was the Kitale museum where we got to learn about the cultures of Western Kenya. It also has a snake park and a small picnic site. Kitale is a very busy town when driving through it but we were out in no time and headed straight to Mount Elgon.

I didn’t know what to expect of Mount Elgon but it turned out to be a very underrated destination in kenya. I don’t know anyone who has been there and there hasn’t been much talk from people about it. The first visit we did in Mount Elgon was exploring the caves. Kitum cave was very interesting in that it’s the only cave in the world where elephants walk inside to lick salt. The elephants have been doing that for hundreds of years and even more impressive is that they do it at night in pitch black darkness. The cave is very huge and deep if you are afraid of darkness or claustrophobic, it will be a good place to face your fears. The cave also has thousands of bats which if you shine a light on them they will disperse in all directions.

The next cave worth exploring is the Makingeny cave which is equally impressive. It is huge and has a waterfall when going in. We moved around the park a bit and the day ended by sleeping in a Kenya wildlife services Banda, which is a self contained house inside the park. This was to make it convenient for the next day climbing the mountain.